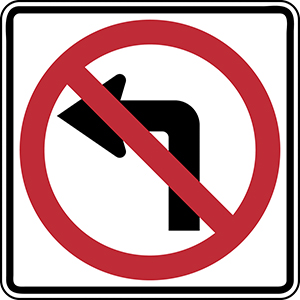 A simple mistake made by a good guy shortly after 10:00 PM led to unfortunate consequences.  The man had a few beers at a bar just before getting pulled over by an arresting police officer.  While the officer was behind a vehicle leaving a parking lot, he noticed an illegal left turn from the accused driver.  The vehicle made a left turn next to a sign that said, “right turn only.”  Additionally, there was a sign approximately 15 feet from the first sign that stated, “no left turn.” This is a violation of California Vehicle Code Section 21461(a).

Instantly after he pulled over the driver, the officer could immediately smell a strong odor of an alcoholic beverage coming from his person while he spoke.  The officer observed extremely bloodshot and glossy eyes so he clearly assumed the driver to have consumed an alcoholic beverage or more.  This led to a series of field sobriety tests which was not conducted properly by the alleged DUI driver.  To demonstrate the tests accordingly, he had to stand in a modified position of attention throughout the entire process, which is having his feet together with his hands to his side.  Repeatedly, the modified position of attention was broken and were to be commanded to go back to the starting position.  The first test began with a nystagmus test, where the accused driver failed to follow the officers’ finger and had a lack of smooth tracking.  During the stand test, he was swaying from front to back and opened his eyes during the examination when asked not to.  The final test was a walk and turn test, where the driver tried to begin before commanded to start, and was losing his balance throughout the process.  These tests led the officer to conduct a preliminary alcohol screening device test, resulting in a .11% for the driver, above the legal limit.

The alleged DUI driver was placed under arrest for a violation of 23152(a) CVC – driving under the influence of alcohol and 23152(b) – driving with .08%, then transported to a headquarters room for additional processing.  He hired an aggressive attorney to vigorously contest.  Even with these facts, the consequences turned out to be minimal for the accused driver.  The San Diego DUI attorney was able to negotiate dismissal of the DUI charges in exchange for a reckless driving, alcohol-related minimal plea bargain.

While you should never risk driving after a few drinks when you could be over the legal limit, be cautious to follow all rules of driving.  A simple mistake which could have easily been avoided, led to minimal consequences due to this San Diego DUI lawyer.