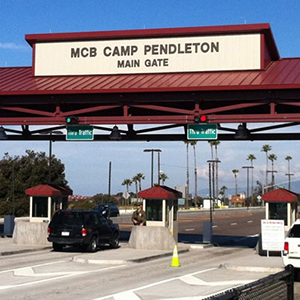 Getting lost after midnight is usually a bad idea, especially if you’ve been drinking.  It’s easy to accidentally drive into a San Diego County military base if you take a wrong turn in Oceanside, Miramar, or Coronado.  Fortunately for this young lady, the San Diego County DUI Law Center provides competent and vigorous drunk driving defense representation in Federal (United States) District Court.

In this case, military police officers at Camp Pendleton’s main access gate requested the assistance of a patrol unit with conducting a DUI investigation of a female displaying several objective symptoms of alcohol intoxication.   Encountering the alleged DUI driver, the officer noticed her head was bobbing and looked confused.  She did not know where she was, but was trying to head to Temecula.  The accused DUI driver had been driving only because she had to leave the house where there was an abusive man in order to look out for her well-being.

During a series of behind-the-wheel screening tests, the individual failed the finger dexterity test.  The accused driver then stated she could not count down from 67 to 54 and did not make an attempt.  When asked to count from letter E to P, she did not make an attempt as well.  There was an obvious odor of an alcoholic beverage coming from her person as she spoke, her eyes were water, and she appeared to have difficulty balancing as she was swaying forward and back.

Due to the failure of the behind-the-wheel screening tests, a series of field sobriety tests took place.  The alleged DUI driver first did a horizontal gaze nystagmus, where she appeared to have difficulty balancing as she was swaying forward and back.  For the next one, a walk and turn test, she failed to keep her hands by her side and only displayed two out of the eight validated clues correctly.  Finally, the accused driver did a one leg stand test, failing to count out loud or watch her right foot as instructed.  She was swaying to her left side and only displayed one out of the four clues correctly.  Based on the totality of the circumstances, the officer determined the driver was impaired and unable to safely operate a motor vehicle.  She was arrested, and the breath sample provided evidence of a 0.15% BAC.

While the potential outcome could have been much worse especially since she had a prior DUI, the alleged DUI driver was able to come out of this incident with minimal consequences while only pleading to reckless driving.  There were to be no jail time, no 5 years of probation, no license suspension, no $2,635 DUI with a prior fine, no trash detail, no public work service program, no house arrest, and no expensive SCRAM alcohol-free bracelet.  She instead paid only a $1000 fine in two $500 payments, attended 53 AA’s, and completed 15 hours of volunteer work for a not-for-profit organization of her choice.