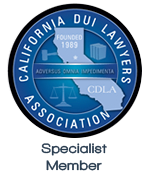 What do you do when you get arrested for a San Diego DUI? For the best results, complete this online case evaluation form. San Diego County DUI Law Center’s attorney Rick Mueller shares samples of his recent success stories.

A young lady does not even realize she is speeding 45 MPH in a 35 MPH zone in north San Diego county. She did not see the DUI cop using a dash mounted radar. Because it’s late at 2 a.m. the cop notices her red, blooshot, watery eyes and begins making assumptions. She tells the San Diego cop she is tried and was just dropping a friend off. The problem is the DUI officer smelled alcohol on her breath. Unexpectedly and contrary to usual police procedure, the drunk driving officer asks her to do a finger count test from behind the wheel. Trying to do the test properly means going slow. Because she did it slowly and paused prior to counting backwards, Deputy Donut asks her to step outside her vehicle. The bowling ball begins to roll. More tests: horizontal gaze nystagmus, walk and turn, one leg stand. Tiny mistakes. Failure to follow confusing instructions a bit. Cop concludes DUI. Tested. Two strong blows. .10% X 2. Arrested for California DUI and Driving with .08% BAC. She hires San Diego DUI lawyer Rick Mueller. DUI charges dropped in exchange for reckless driving charge. No suspension by DMV or court.

A gentleman drives on the 5 freeway in San Diego County, looking for a gas station. Not sure which way to go, a wrong turn is taken. San Diego DUI cop sees this, pulls over vehicle. Trouble parking perfectly. Officer smells booze. Denied drinking even though showing signs of drinking. Cop starts asking where he was going, where he was coming from. Asked to do a battery of standardized field sobriety tests, gentleman misses a few steps and sways a bit. Footwork does not impress drunk driving cop and arrested for DUI. Two breath samples reveal .17% and .17%. Arrested for California DUI and Driving with .08% BAC. He retains San Diego DUI attorney Rick Mueller. DUI charges dropped in exchange for reckless driving charge. No suspension by DMV or court.

Every case Mr. Mueller defends is different with respect to the facts, strategy, defense and/or tactic. These positive outcomes were partially dependent on the facts of the particular cases. The results will differ if based on different facts. These results do not in themselves constitute or guarantee a prediction in your DMV or DUI outcome. Of course, your likelihood of prevailing significantly increases if you hire a San Diego California DUI Specialist. There are only four San Diego County DUI Specialists certified by California DUI Lawyers Association.